The Yama Niyama Llamas are ten paintings inspired by time spent at Yoga Vibe in Rochester, NY.  For those unfamiliar, the Yamas are ethical guidelines for the practicing yogi and the Niyamas are positive duties or observances. When these guidelines and observances were brought up in class, the concept of the “Llama of Contentment” (Santoṣa) came up as a humorous discussion. The five Niyama llamas are pictured solo and practicing their respective positive observances. The five Yama llamas are just trying to live ethically while juxtaposed with mischievous and questionable characters from previous works. Each piece  is 10″ x 10″ and painted in acrylic (some feature mica flake and Swarovski crystal) on canvas.

These colorful paintings are infused with a lot of humor and were part of a solo show (the first ever at Yoga Vibe) in the fall of 2017. Only a few of the llamas remain – contact Stacey if one speaks to you! 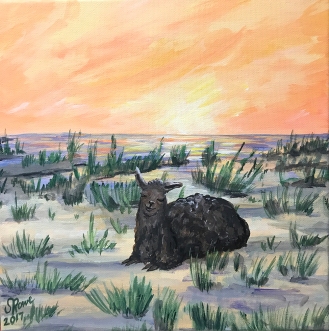 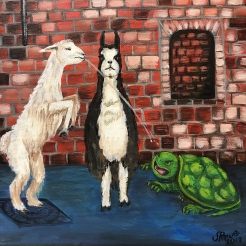 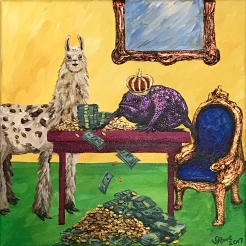